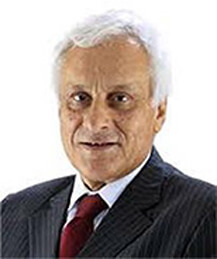 Mr. Shalaby was appointed Chairman of the Egyptian Company for Mobile Services (Mobinil) in 2008; prior to that he was President and CEO since 2005.

Mr. Shalaby came to Mobinil from Washington, DC, where he was AT&T Director for Public Affairs, serving as the company’s link to lawmakers on Capitol Hill and lobbying the executive branch of the U.S. government. He helped in achieving more liberalization of the telecom sector internationally for the emerging nations of the Middle East, Africa, and Eastern Europe through the relevant bi-lateral and multi-lateral agencies. He started his professional career with AT&T in San Jose.

Over the years, Mr. Shalaby has served on the boards of the American Chamber of Commerce, where he was also a former President, the Bi-National Fulbright Commission, and Seeds of Peace. He currently chairs the boards of Injaz and Enactus in Egypt. Mr. Shalaby also serves on the board of Enactus Worldwide and Hands Along the Nile, a U.S.-based NGO with significant development activities in Egypt.